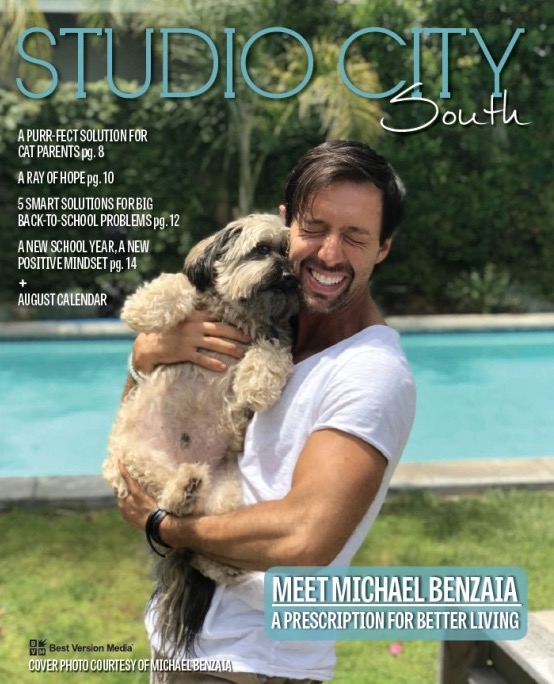 The monthly Studio City South has a feature article on Custom Catios in its August 2018 publication. Written by Elyse Glickman, “A Purr-fect Solution for Cat Parents,” does en excellent job explaining our purpose and beginning:

“There is a great cat dilemma being thrust upon Studio City families. Experts and cat behaviorists – from American’s favorite “Cat Daddy” Jackson Galaxy to the American Association of Feline Practitioners (veterinarians), agree that cats should not go outside unsupervised. While cats benefit from exercise and fresh air, too many hazards (cars, coyotes, fighting, disease, and poison) conspire to knock years off their lives.

Indoor cats, however, suffer from a lack of stimulation, which leads to boredom and behavioral issues. This is why Alan Breslauer, AKA the Catio Guy, endeavored to bridge the gap between outdoor and indoor cats by creating safe enclosures called catios (cat patios). After building a couple of catios over a decade for his own cats, Monkey and Cooper, he launched “Custom Catios,” specializing in state of the art enclosures that not only keep cats safe and stimulated, but also blend in with houses to ensure homeowners are happy, too.”

There’s also a nice paragraph on my experience working with Jackson Galaxy:

“Breslauer’s enclosures left an impression with Jackson Galaxy, who hired Custom Catios to appear on his Animal Planet show, “Cat vs. Dog.” Breslauer looks back fondly at the experience, and credits Galaxy for his generosity in sharing his vast cat wisdom. “I will forever be indebted to Jackson who taught me so much about catios. All my clients benefit from the knowledge he imparted to me.”

Unfortunately, the article only gets into a handful of the many catio benefits:

“Breslauer notes that there are other benefits for both cats and humans, including the ability to move the litter box outside, improving sanitary conditions and smell within the home. Increased outdoor vertical space, meanwhile, often leads to better camaraderie in multi-cat households. Catio owners also report getting better sleep as cats are able to get their nighttime stimulation in an enclosure rather than pestering their human parents.”

In any case, check out the entire article!