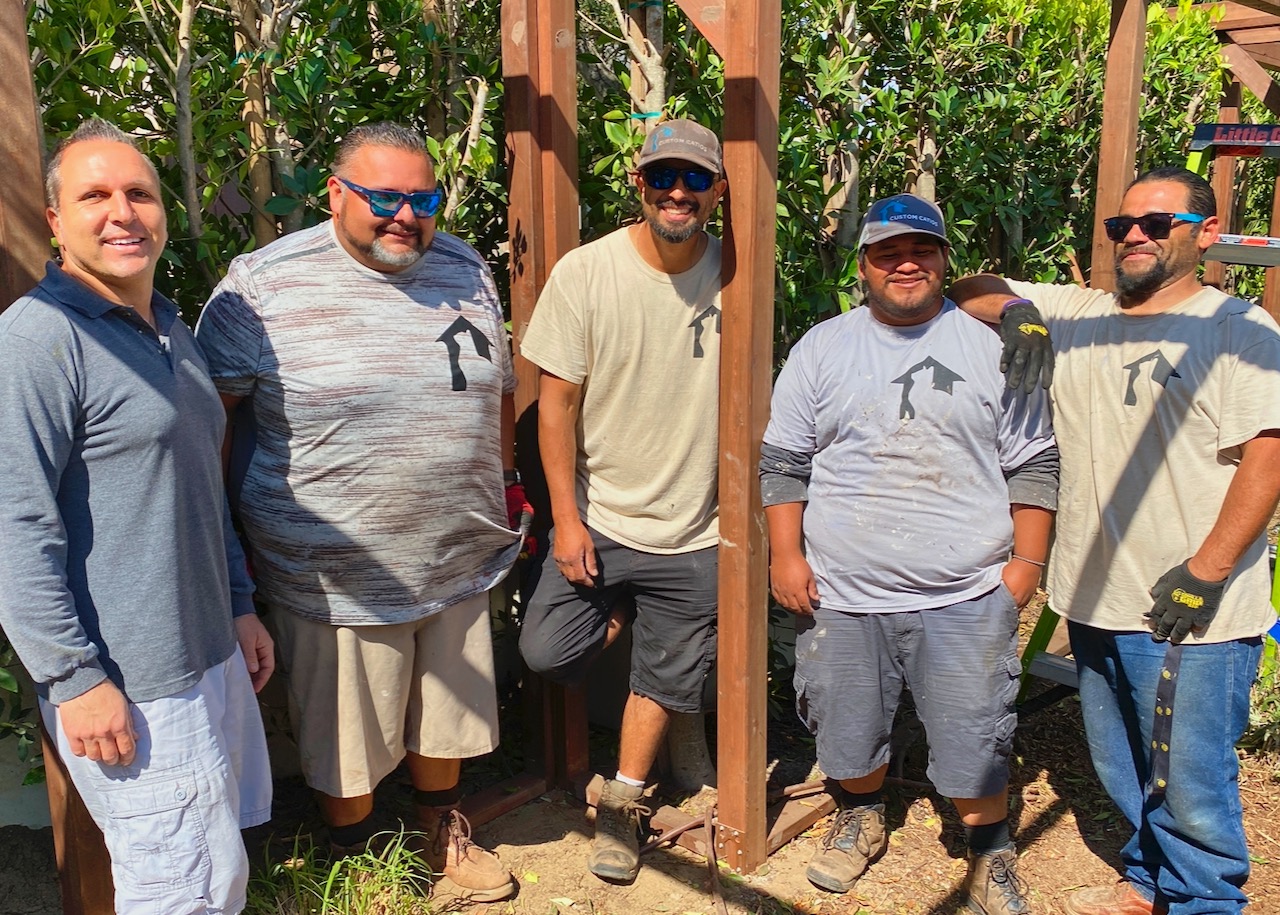 Joy! That’s Custom Catios’ one-word mission statement I first wrote about in 2020. With every project, big or small, elaborate or simple, expensive or inexpensive, we strive to deliver joy to cats and their hooman guardians. Hopefully, the photos and videos posted to social media (Facebook, Instagram, TikTok) convey that joy. What the images do not show, however, is the brilliant work of my longtime crew that helps create that joy. Please take a moment to learn about the exceptional Custom Catios team, which has grown by two over the past 18 months.

Artin Arefian, 40, is my right-hand man. “Boss,” as the crew calls him, does everything from design, pricing, scheduling, picking up and delivering materials, and supervising to hardcore construction. There is nothing that he does not excel at. Artin is that guy with a beautiful new F-150 Ford truck without a scratch. Only, a few months after meeting him, you learn it’s a 15-year-old truck. He is meticulous. He is Boss!

Artin is also good people. He and his wife Nancy live in Encino with Aiden, their three-year-old son, and their infant, Camden. He is a family man through and through. A few clients met Artin’s amazing 73-year-old father, Vic, who helped build a handful of catios early on. It is impossible to imagine a better man than Artin to run the crew.

Luis Beltran, 43, aka “The Artist,” has more than 100 catios under his belt. Luis brings next-level creativity and craftsmanship to every job. He’s the guy who beautifully weaved an enclosure around the branches of a 100-year-old orange tree. He’s also the guy who created a gorgeous wood carving in the shape of the CatCafe Lounge logo.

Luis does not get by on talent alone. He is constantly pushing himself by taking on new challenges. And lest anyone think Luis is not committed, he commutes to job sites across Los Angeles and Orange County from Lancaster! So please cut him some slack if you catch him taking a catnap at lunch. Luis recently tied the knot, marrying Katie — whose sister, Dee, was also part of the CC crew, before moving to the east coast.

Henry Lopez, 39, started in construction as a sweeper when he was 15-years-old. He has seen and done it all. I call him “The Wizard” because we have never encountered a problem that Henry could not magically fix. To him, there is no such thing as a problem but rather a puzzle waiting to be solved. Henry is the guy everyone loves to have on their team. Which is why Luis, who goes back more than a decade with Henry, encouraged Boss to hire him. They are old friends, but they might as well be brothers.

Henry is big on family too. He’s a single father who has raised three kids – Kaitlyn, 21, Elijah, 19, and Eva, 17 – by himself. They now live near Luis in Lancaster.

Ramon Cruz, 42, who started working construction with his general contractor father in high school, has been with the crew for more than a year. He immediately showed off his creativity by creating a cat-shaped shelf for the Kitten Lady, which has since become a client favorite. Ramon is big and strong, which makes him ideal for testing the structural integrity of our runs, bridges, and nests. If they can hold him, they are certified Ramon Strong™️ and are deemed cat ready.

Ramon also has family ties to the team. Luis goes back 18 years with Ramon and is his son’s (Ramon Jr.) godfather. When not working, you can find Ramon coaching his son’s and daughter’s (Eliana) football, soccer, and baseball teams, while his wife, Amy, cheers from the stands.

Elijah Lopez, Henry’s son, is the latest addition to the crew. In this case, the apple does not fall far from the tree, as Elijah can do it all despite his youth. Elijah, who is also in school studying English and Psychology, has been working side-jobs with his father since he was 10-years-old. He enjoys reading comic books, listening to classic rock, and playing video games in his free time.

Past clients regularly tell me that the guys (and occasional gal) seem like one big happy family (true!) and are hands down the nicest and the best crew to ever work on their property. Superlatives like “The A-Team” and “The Dream Team” are regularly bandied about or written up in Yelp reviews. I prefer The Joy Crew.