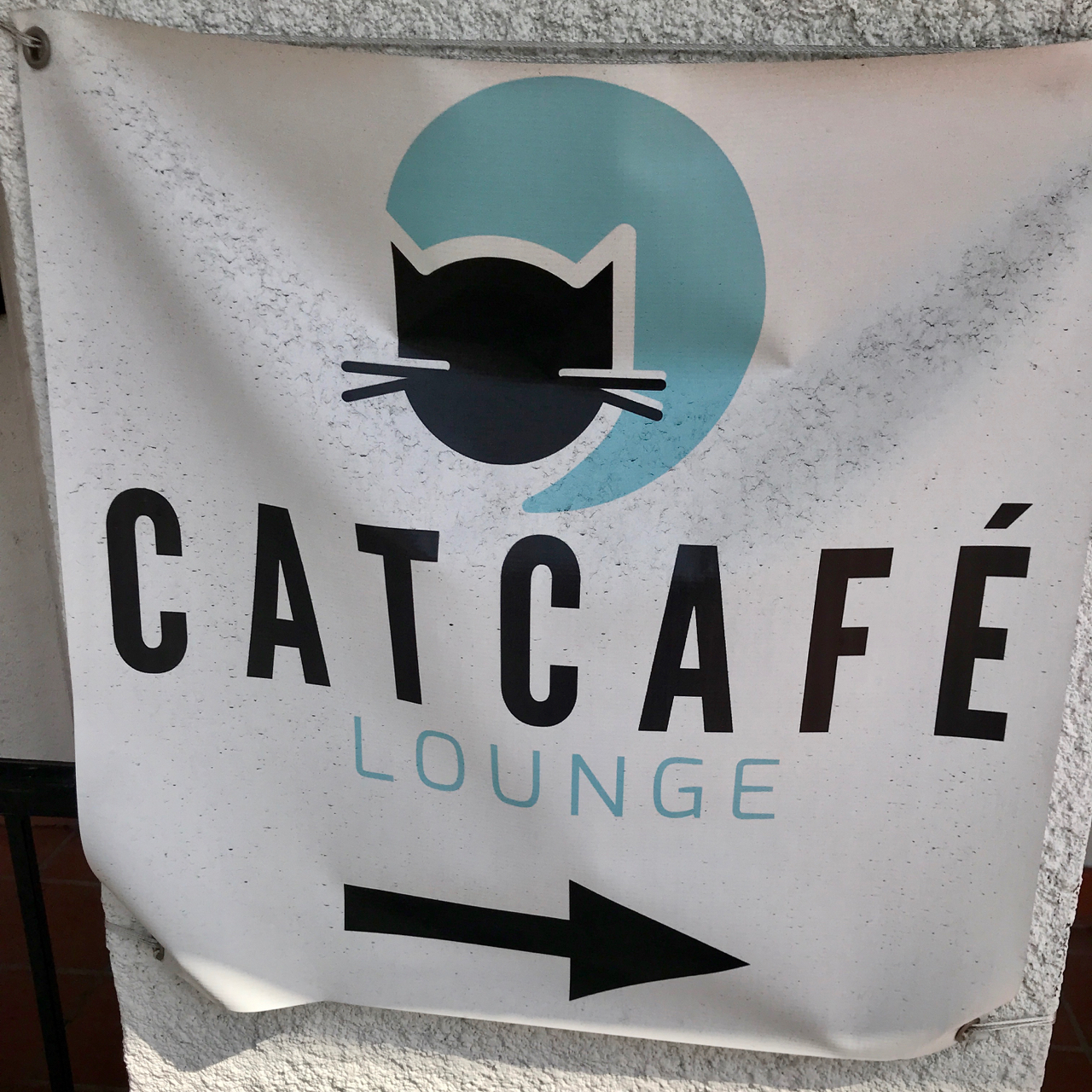 Last week I visited L.A.’s CatCafe Lounge and was blown away by the concept. The place has a visually appealing setup geared towards cat stimulation and enrichment. Scores of gatos live happily together until they are adopted by Angelenos into forever homes. Amazingly, despite only opening its doors in 2018, the CatCafe has already adopted out 143 cats! That success is largely attributable to the hard work and execution of Founder and Executive Director, Kristi Labrenz Galvan, who kindly agreed to this interview.

Catio Guy: Can you give us a bit of the backstory to the CatCafe Lounge? What inspired you?

Kristi: Prior to cat cafe’s becoming a trend in the US, I visited one in Tokyo. What struck me was the concept that a room full of cats was super enjoyable (kinda made me giddy even) and how happy the cats seemed to be. This made me wonder, if adoptions were added to the mix, would adoption rates increase due to potential adopters being able to interact and get to know their potential pet, versus the current model of picking a scared cat out of a line up of other equally scared unhappy cats. I was sold on the humane aspect of the model and loved that we could make a life-saving impact. As soon as I flew back to LA I started doing research and was surprised to find there were 5 cat cafe’s in the US (1 being nonprofit). I knew this was my calling and decided to dedicate my skills to saving cats!

Catio Guy: I was surprised by the size and breadth of the operation. Can you talk about the number of cats living in the cafe and where they come from?

Kristi: Our cats come from the shelter and some come from the streets, before they end up in the shelter. We have between 35-40 cats, which means lots of litter, food, scratchers, toys, bedding, and treats. As you stated, we have a large space, plus we have tons of shelving and climbing options so cats receive the enrichment they need to be fulfilled and so they can be in control of their exposure to people. People always comment on how happy our cats are! It is because we don’t limit their needs and we don’t force them to interact if they don’t want to. Another unique aspect of our cat cafe is that we work with undersocialized cats. The cats that don’t make it out of the shelter because they appear “fractious” or unadoptable. We want those cats! These cats just need a space to feel safe and in control and with the help of a very mindful team of staff and volunteers, under the guidance of The Cat Counselor, they eventually come out of their shell and blossom into really lovely social beings.

Story of Hunter and Sammy

Catio Guy: Do you have a favorite story about a cat that was rescued through the CatCafe?

Kristi: My favorite story, is about Hunter and Sammy. Hunter was an owner-surrender who came in terrified of people. He would actually tremble and recoil if anyone approached instead of running away, it was heartbreaking. And Sammy was rescued from a hoarder house of about 70 cats. After working with Hunter for 2 months he one day decided he was done hiding and walked out into the middle of the lounge, looked around as if he’d been hibernating, and never hid again! Sammy on the other hand was used to being in cramped spaces so he took some time getting used to our large space. But what was amazing to witness was the bond they started to develop. Each one brought out the best in each other, they comforted each other. They would have little meet-ups at the food bowls – they were so cute! We made sure they were adopted together and that when they did, we’d provide their new parents with the tools to continue to work with them during their transition into their furever home.

Catio Guy: I love that the CatCafe Lounge is a nonprofit. Why did you go that route and how can people support the cause?

Kristi: Thank you! Being a nonprofit was important to me as I wanted people to, without a doubt, know that we were operating to save lives and not profit off of cats being entertainment. When I visited the cat cafe in Japan, I felt so guilty paying to be entertained at their expense. It was a conflicted experience! I was beyond happy (giddy, as I said) to be surrounded by my favorite pet, but at the same time, I felt sad for paying for the experience knowing it was going toward someone interested in profiting from tourists. I didn’t want our guests to ever feel this way! The very definition of nonprofit means reinvesting the funds toward a mission versus profiting from it. As I mentioned, I discovered the model prior to it being hip or trendy – sure our space is designed well so people are comfortable, but it all originates from a purpose to save cats, provide them a happy temporary home, and help them find their person. If guests are comfortable and feel at home in our space, it reduces a “no” mentality and instead opens up their minds to the possibility of adopting a cat.

We are in the process of reinvesting some of our funds to open a Kitten Lounge this summer to save 300 kittens in 3 months. We are currently fundraising to close the gap in order for us to create a magical kitten enrichment purradise. Kitten season is a huge challenge in LA. 10k kittens push on the city’s systems and many are euthanized. So we are partnering with Kitten Rescue LA and Stray Cat Alliance to save 300 (hopefully more) in 3 months! Please check out our fundraiser, we offer perks for donations, so everyone wins!

In addition to giving to such a noble cause, be sure to follow the CatCafe Lounge on social media: 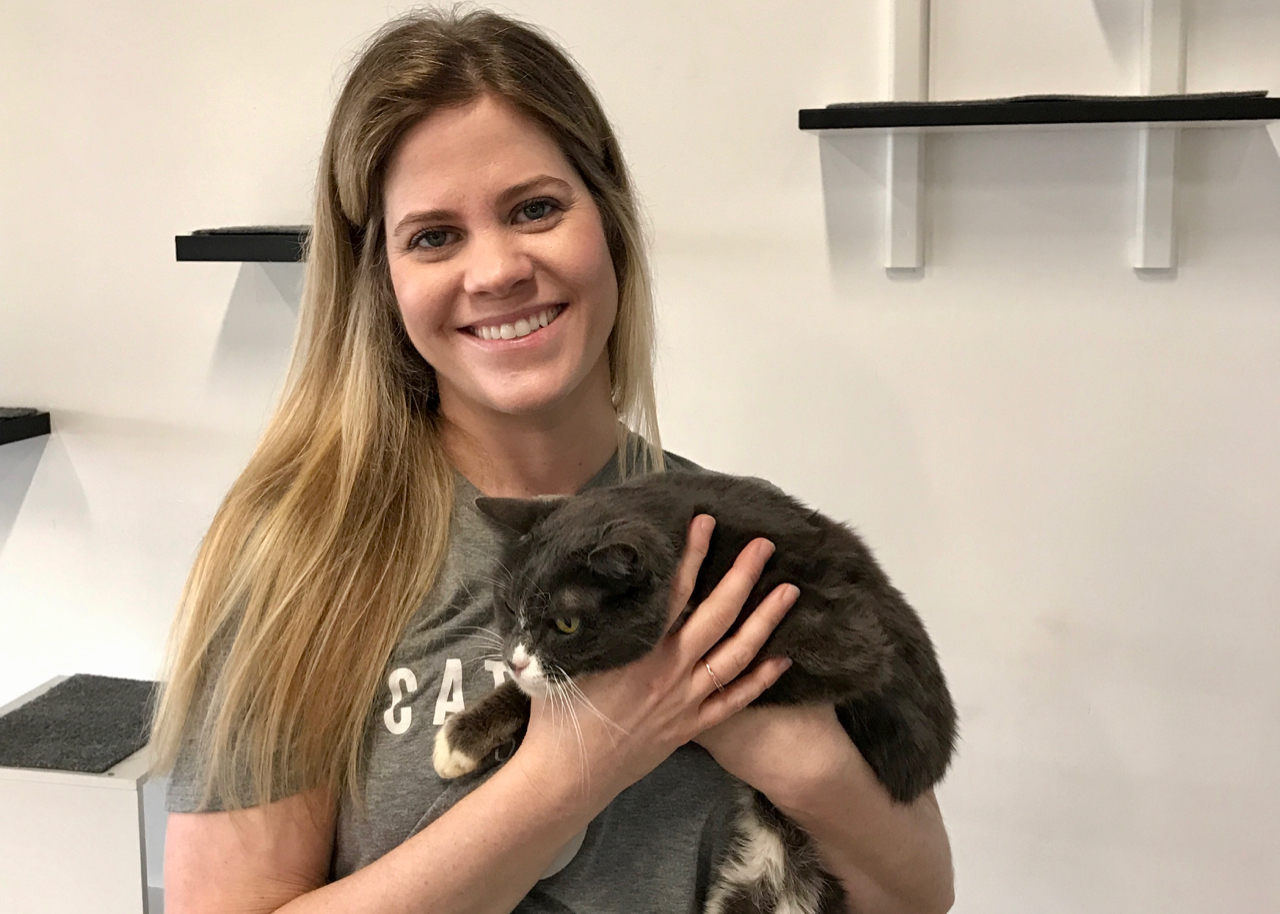 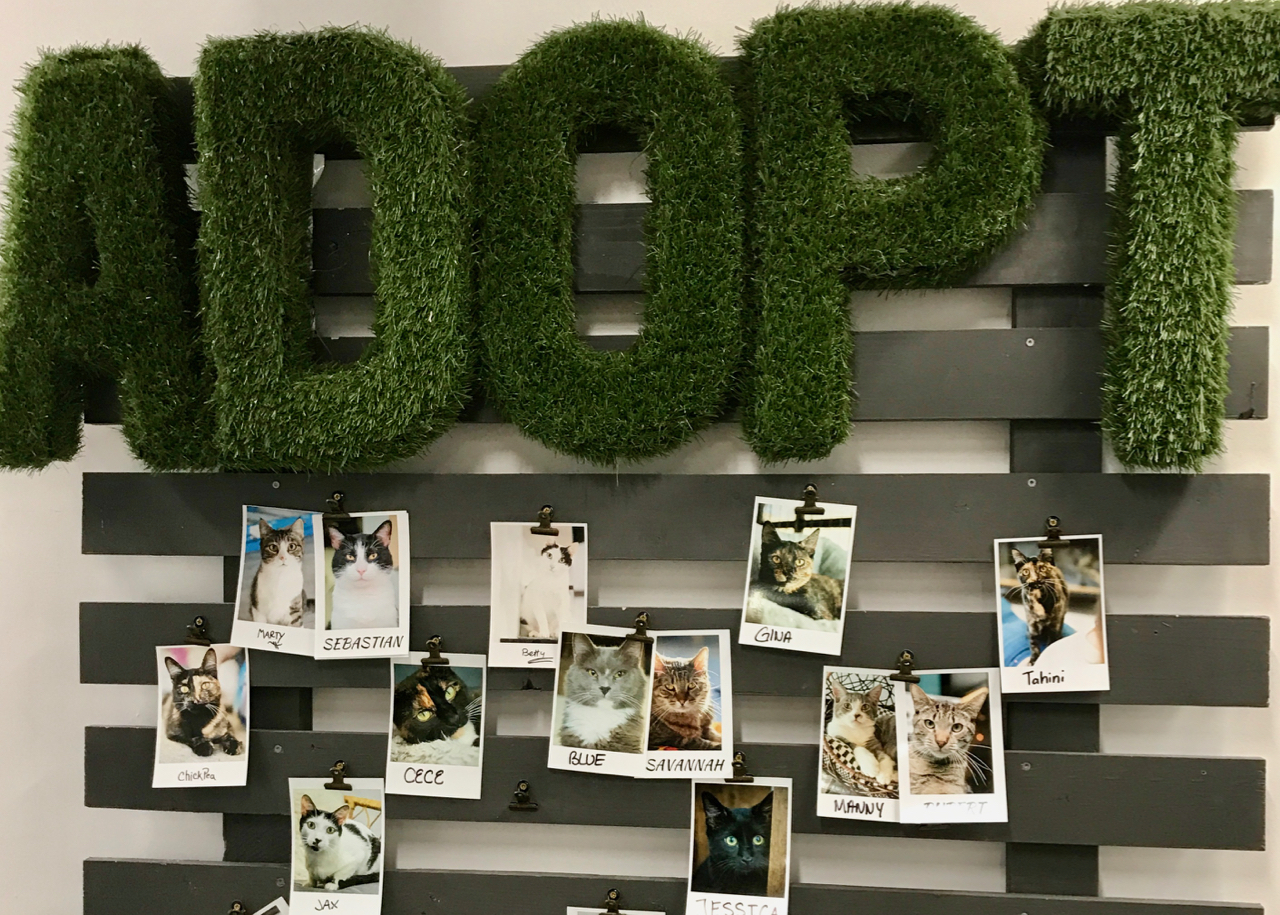 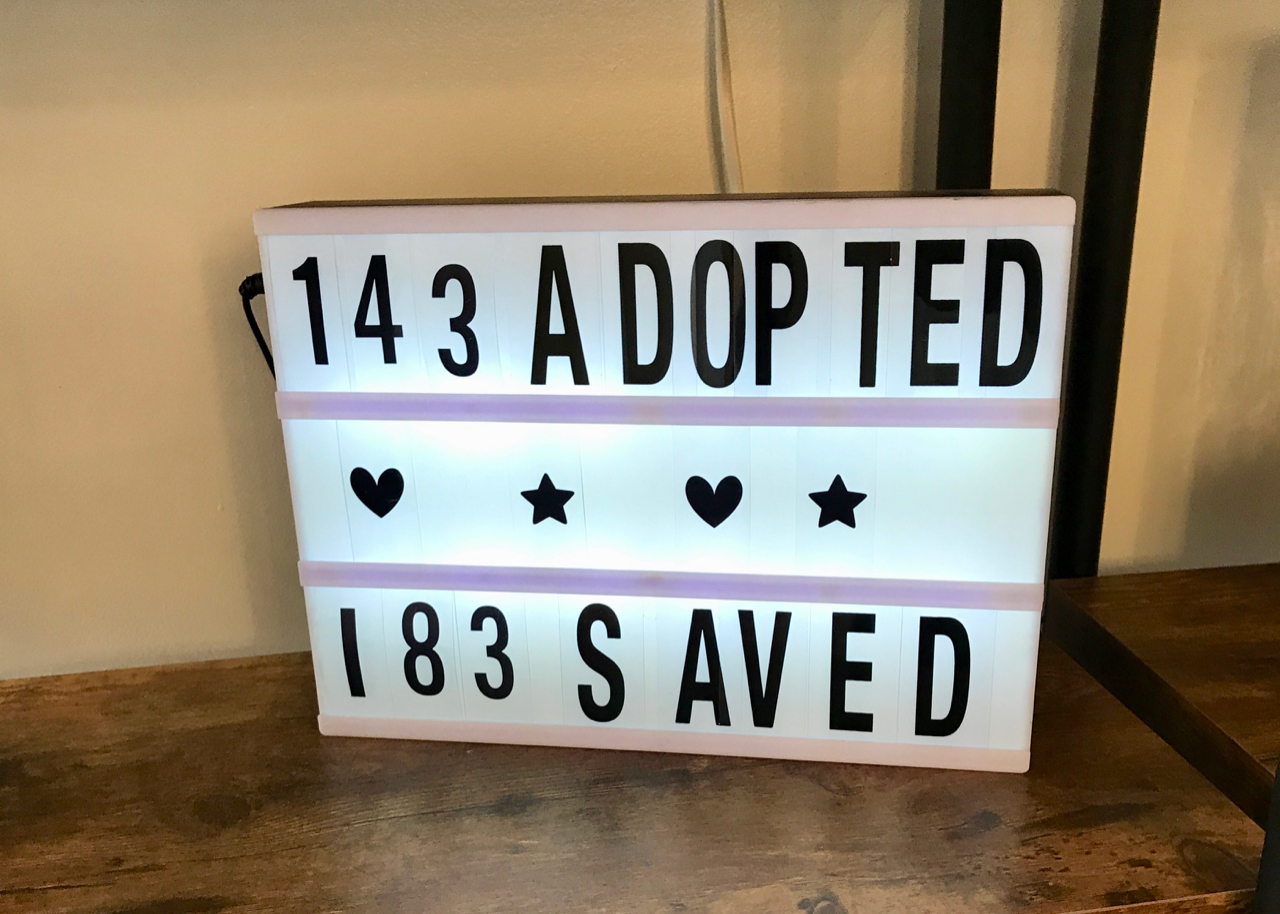 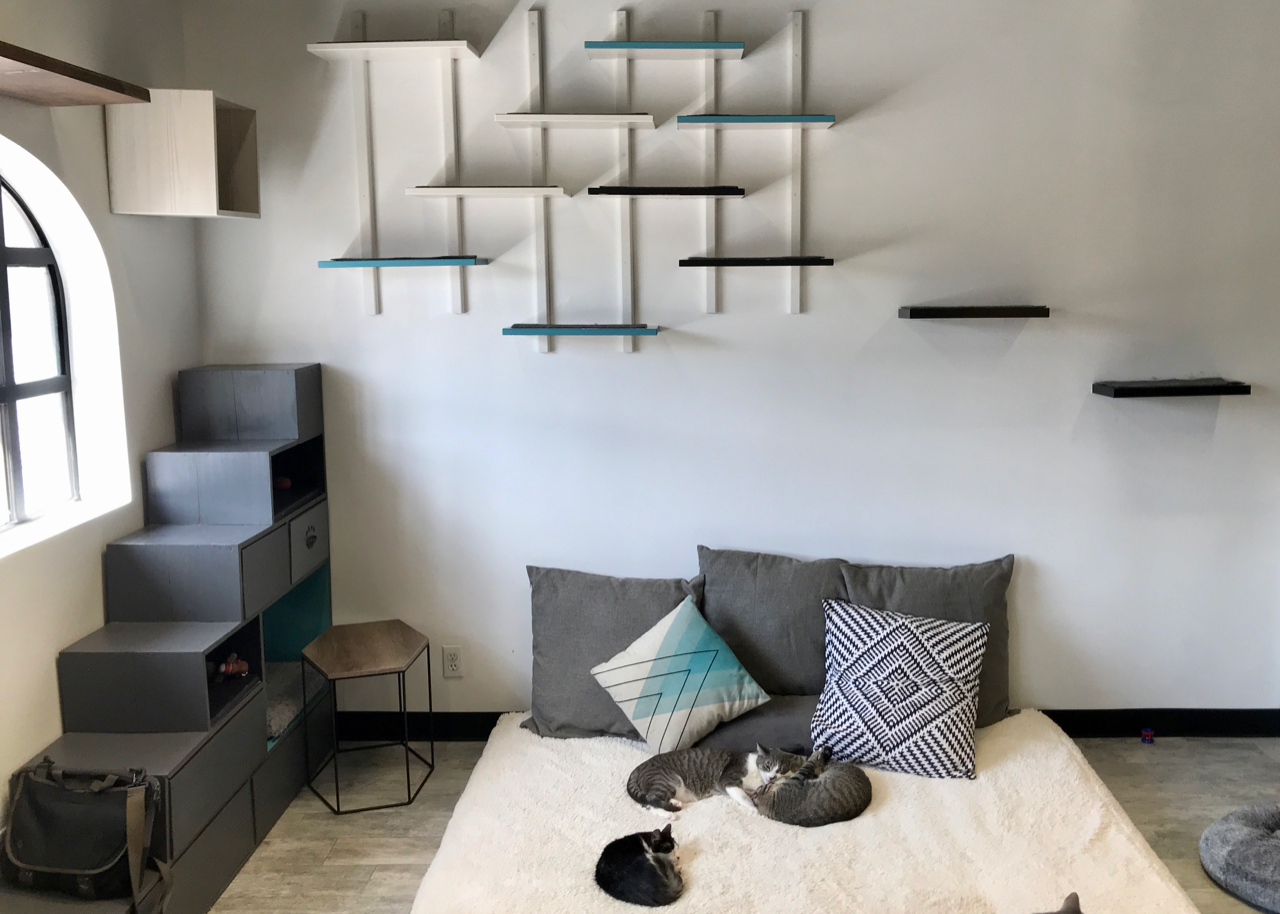 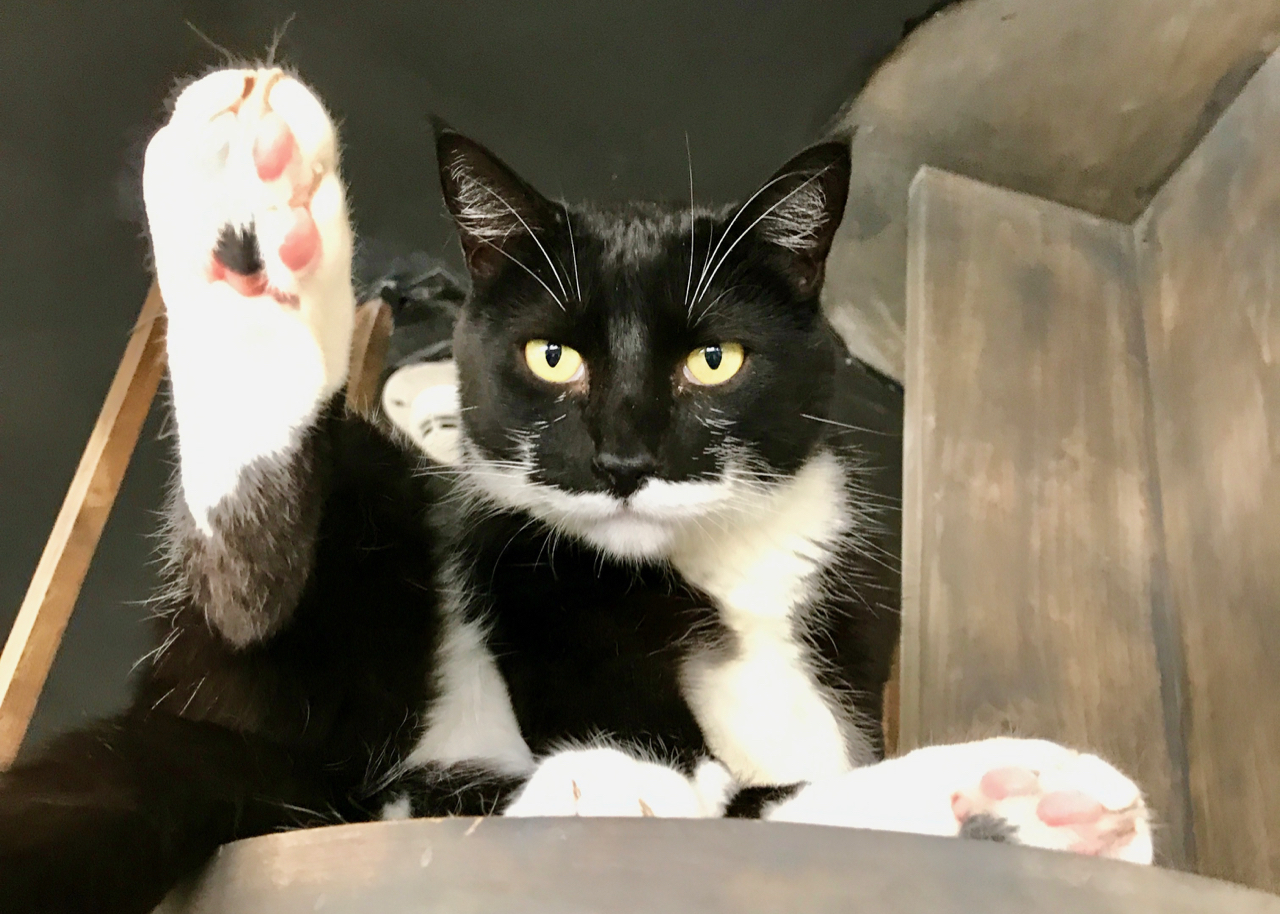